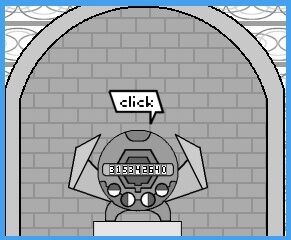 The Mysterious Clicking Device (name from Oh No Robot transcripts) is a strange device located in the lower levels of The Mansion of E, but above The Basement proper.

It was one of several features that was already in place(

) when the E Family moved into the Mansion. Attempting to damage the device triggers a rather dramatic self-defense response, as discovered(

) by Rosemary when first introduced.

The design of the device has changed as part of the general art evolution of the comic.

Strapped to the front of the device is a countdown translator(

) created by Ludwig. It is counting down and there is no indication as to what.

The timer seems to be counting down by seconds. Assuming a  60 seconds and 60 minutes time format, the Clicker has 87595 hours, 10 minutes, 51 seconds until it reaches zero from its first appearance. Assuming a rigid 24-hour day format, that's more than 3649 days, or (assuming a 356-day year) more than 10 years. So it will be some time until its countdown is complete.

From its first and last appearance on the Endless Day, Sylvester and Rosemary has spent 39604 seconds or 11 hours and 4 seconds in the Basement.

Community content is available under CC-BY-SA unless otherwise noted.
Advertisement